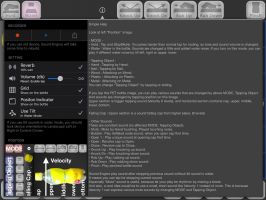 Hidenori Matsuoka has updated PET Bottling to v4.0 and Chord NOTE to v7.8.2 for iOS, saying:

PET Bottling has implemented recording function. Its feature is very simple UI and doesn't disturb user's performance. Sound Engine is very stable and does not overload the device. User can import recorded WAV file to DAW and pass it to someone. User will be able to record and play while listening to the song user is making.