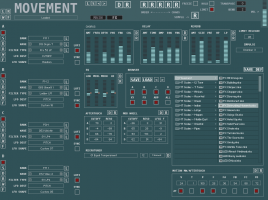 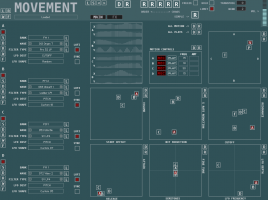 Movement is launched with a "no brainer" price of $6.49 and expands on Motion by adding a further 16 motion sequencers which takes it into new territory. It is also capable of much simpler sounds with ease using the simple randomizer which adds a lot more scope for its sonic potential. There was an attempt at simplifying the powerful yet complex interface of Motion by keeping most parameters but that could be edited using a single panel.

There are a total of 24 motion sequencers which include a vector crossfade between the 4 synths volumes, pan, tune, filter cutoff & resonance, synth volumes, start offset, bit reduction, samplerate reduction, LFO frequency and LFO amount. The XY pads can be recorded in real-time over 128 steps and have the ability to change the amount and frequency of playback. As well as the ability to record the motion sequencers there is also an internal database of 200 pre-recorded sequences which are used by the randomizers.

Like most other HGS creations, Movement makes great use of optimized global randomizers with a choice of complexity as well as many local randomizers. The FX section includes chorus/flanger/phaser, a reverb with 50 impulse responses, a stereo delay, an EQ, a limiter, and a microtuner with 300 microtonal presets. 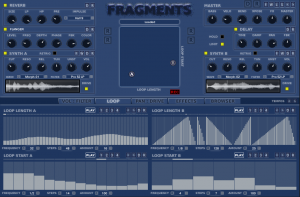 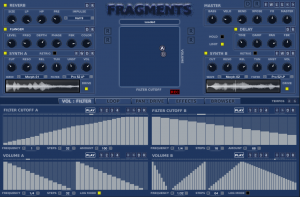 Fragments is an attempt at exploring granular style synthesis within the Kontakt system. It uses long evolving waveforms and the sound is generated by playing looped sections from these WAVs. The Loop position and length can be sequenced in real-time via the dedicated loop sequencers which can create both glitchy and interesting pads.

It has a dual synth architecture with both synths sharing the same features. As well as the 2 loop start and length sequencers, there are also another 6 per synth which control cutoff, volume, pan, drive, reverb send and delay send. The sequencers use tempo based divisions making them great for tempo-synced patterns, have a maximum of 128 steps and 11 choices of tempo division.

There are also 2 XY pads which represent the currently visible sequencers and will animate to show their current state when the sequencers are in play mode. They can also be used to record the sequencers in real-time. When a sequencer not in play mode the XY controls the static value used for the destination amount.

Fragments was designed to be intuitive and easy to use with all parameters + 4 sequencers visible. As with other HGS creations full use of local and global randomizers are available to instantly create unique and varied presets. There is also an internal presets system in place with a built in browser.

Fragments cost $49.99 but is available as an introductory offer for $24.99 until the end of August.