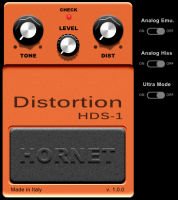 HoRNet has released HDS1, a guitar distortion modeled after a famous pedal produced by a Japanese manufacturer since the late seventies.

The sound of the pedal can be recognized in many recordings of the last 30 years, it's a simple but effective circuit, that often is criticized for being too harsh sounding, for this reason many modifications have been created, and HoRNet decided to also emulate the most famous one - the "ULTRA" mod.

HoRNet HDS1 is available on www.hornetplugins.com for 7,99 Euro.