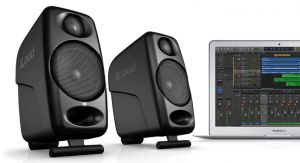 IK Multimedia has announced iLoud Micro Monitor, which is billed as "the smallest active studio reference monitor in the world".

iLoud Micro Monitor provides a flat and linear speaker response in any listening environment. It's able to do this thanks to its onboard 56-bit digital signal processor (DSP). This DSP handles the frequency and phase response of the monitor and also manages the dynamic range so that the drivers are always controlled. It also acts as a digital crossover allows for invisibly smooth transitions between the drivers themselves. This DSP can be adjusted to suit different listening environments thanks to three EQ switches: One for treble, one for bass and a "DESKTOP" toggle that lets users optimize iLoud Micro Monitor for use in either a free field or desktop setup. iLoud Micro Monitor can also be physically positioned at two angles of inclination.

iLoud Micro Monitor can also be used with a variety of audio input options. It accepts both RCA and 1/8" wired connections and can also be paired for Bluetooth streaming with all Bluetooth audio streaming-enabled device. With its portability and comprehensive input options, iLoud Micro Monitor is able to provide ultra-linear sound no matter whether they're mixing in a small makeshift recording space, mastering in a hotel room, producing in a larger studio or just listening at home.

iLoud Micro Monitor will be available early Q2 2016 from music and electronics retailers worldwide, and from the IK online store, for $/€299.99 per pair (excluding taxes).