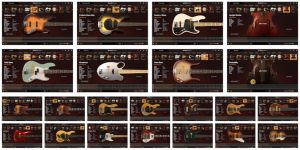 Producers know how important it is to have a great-sounding bassline. Now MODO BASS 2.0 offers even more realism and the stunning sounds of sought-after electric and double basses being played by master musicians, all with the convenience of a plug-in virtual instrument.

MODO BASS 2.0 includes the 14 original iconic basses plus 8 exciting new ones, for a total of up to 22 basses included to cover any style of music. There are 6 new electric models featuring 2 legendary fretless basses plus 2 double-bass instruments. And with the power of MODO BASS synthesis, users can turn any standard 4-string electric bass into a 5- or 6-string bass for unmatched sonic options.

Fretless Freedom
There's Fretless Jazz, inspired by the iconic Jaco Pastorius's customized Jazz Bass with its recognizable tone and dynamics, and Fretless Bass Man, inspired by Pino Palladino's StingRay. MODO BASS 2 now offers the ability to turn any of the 18 available electric basses also into a fretless model (and the fretless models into fretted basses as well).

Double Basses
MODO BASS 2 also adds 2 double basses to the collection. Choose Rockabilly for old-school slapping styles or Upright Studio for that classic jazz sound. A premiere for MODO BASS physical model synthesis, the new double basses are modeled in their own studio space with a selection of movable mics and a piezo signal that can be blended in and then run through MODO's stomps and amps as desired. And finally, a pair of stereo room mics lets users mix in the ambient room sound.

The new PATTERNS section offers thousands of patterns and filters to browse by genre, song section, length, time signature and more. It's designed to be easy to audition any one and find exactly what's needed, whether it's the backbone of a full song or just a handy solo lick to lead into the next song section. All patterns were performed by professional bass players with a groove and feel in MODO BASS.

MODO BASS recreates each string's response to the action of the "player" and the interaction of the string with the fingerboard, body and pickups of the bass instrument. Then using IK's analog modeling expertise, the amp and effects of an electric bass rig are added to the sound chain.