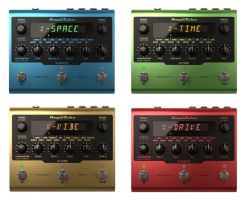 IK Multimedia has released the AmpliTube X-GEAR pedals. Here's what they're saying:

Each high-performance pedal features 16 different effects, drawn from the most popular AmpliTube models and all-new reverb and delay algorithms, bringing IK's industry-leading effects out of the computer and onto pedalboards. And each pedal is accompanied by an exclusive virtual X-GEAR version of the exact same effects for use in AmpliTube 5 (SE version included). This lets users record, tweak settings and save presets back to the hardware pedal. Now guitarists can switch between stage and studio seamlessly and enjoy world-class tone anywhere.

AmpliTube X-GEAR pedals leverage IK's latest technologies and over 20 years of experience of amp and FX modeling. The DSP onboard includes 16 custom high-end algorithms per pedal, drawn from the most popular AmpliTube models along with all-new reverb and delay algorithms.

X-GEAR pedals feature an aluminum chassis designed and made in Italy. There's ultra-low noise, 24-bit/192kHz converters, an extended 5 Hz - 24 kHz frequency response and up to 123 dB dynamic range for whisper-quiet operation no matter how much gain is applied. With a pure analog dry path and selectable true or soft bypass, IK says the guitar's tone will ring true no matter how simple or sophisticated the signal chain becomes.

Each AmpliTube X-GEAR pedal includes a matching virtual version for Mac/PC and a copy of AmpliTube 5 SE. Opening any version of AmpliTube 5, users will find a virtual X-GEAR pedal available as a stomp for use within the program. Adjust any of the pedal settings with the convenience of AmpliTube's workflow and save them as presets. The X-GEAR Librarian lets users move presets between X-GEAR pedals and AmpliTube and easily reorganize them on the hardware pedal, where up to 300 presets can be stored.

All-in-one recording
X-GEAR pedals also work as a USB audio interface. The same ultra-low noise converters and frequency response capture bass or guitar in all its range and dynamics. Versatile routing options let users choose between sending the wet or dry signals to their DAW. There's stereo out for monitoring and thanks to full MIDI implementation users can map the dials and stomps of X-GEAR to control AmpliTube and/or any compatible program.

From soundcheck to final encore
AmpliTube X-GEAR pedals offer everything players need to perform at their best. The intuitive interface and control knobs are easy to tweak on the fly. Indoors or out, a high-contrast LED display keeps users informed on their settings and preset banks. An expression pedal input adds additional control over any parameter, while full MIDI implementation is built-in for even the most complex setups. IK has also included 5 cabinet impulse responses in each pedal to connect directly to the PA.

Signal chain to the stars
Combining AmpliTube X-GEAR pedals creates a formidable team, seamlessly sending and receiving MIDI commands for dramatic effects changes. With the included Librarian, users can easily set up one X-GEAR pedal as the master to send program changes to the other pedals, and then just drop the presets they want to be activated into the appropriate slots. Daisy-chain the pedals together via MIDI and let the show begin.

Price: AmpliTube X-GEAR pedals are available now from the IK Multimedia online store and from IK authorized dealers worldwide for $/€299.99.