IK Multimedia has announced the official launch of the worldwide "Stomp onto a Revolution" tour. StompIO, the hardware-software guitar and bass multi FX system, will be featured in open clinics and special events dedicated to "change the way musicians gig live and record in the studio forever". Kicking off in May and lasting through Summer 2008, "Stomp onto a Revolution" Tour dates will be held in the United States, Germany, Japan, Italy and the UK, with more to be announced. These special events are free to attend, featuring famous and expert musicians that already use StompIO live on stage and in the studio. Reserve your seat now and catch the StompIO Tour to win music gear prizes, concert tickets and "watch history unfold as StompIO turns your Mac/PC into the most powerful amp and stomp-box modeling system ever made!" 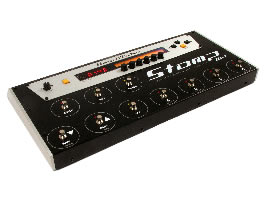 Check out tour dates and reserve your seats here: stompio.com/tour

Learn from professional artists and IK clinicians how StompIO integrates hardware and software to work on stage like a traditional multi-FX pedal with "stunning" realism and tone. Featuring: Traa Daniels, bassist from the multi-platinum rock band P.O.D., cult-funky bassist and vocalist T.M. Stevens, melodic virtuoso guitarist Neil Zaza, Tommy Bolan wicked guitarist/producer from NYC band and Warlock, and many more to be announced.

Let StompIO Tour's expert clinicians and celebrity musicians show you how StompIO saves you time and frustration in the studio by capturing every detail of your performance and integrating seamlessly with your preferred DAW. Demo units of StompIO will be at every event so you can rock out and see how easy it is to take control of all of the amps, cabinets and FX from AmpliTube 2, AmpliTube Jimi Hendrix, Ampeg SVX, AmpliTube Metal and future IK software packages.

Reserving your seat now online and bringing a friend with you to the event will entitle you and your friend to receive a copy of AmpliTube 2 DUO and Ampeg SVX UNO at the end of the event TOTALLY FREE. Drawings at the event will also give you chances to win IK's StealthPlug, tickets to a P.O.D. concert in L.A., expensive music gear from StompIO Tour Sponsors, IK's music production hardware and software tools, T-shirts and all kinds of prizes just for showing up.

Check the IK website and reserve your free seat to join the StompIO Revolution in these cities: