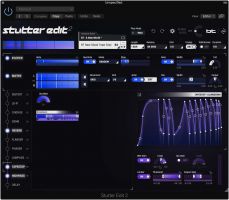 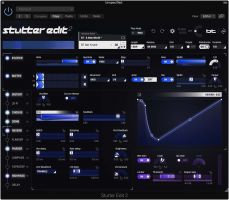 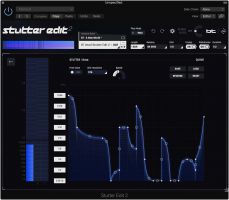 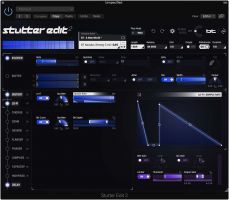 Stutter Edit 2 creates the famous "stutter" editing effect with one button, slicing audio into small fragments and sequencing the pieces into razor-sharp rhythmic effects, recreating techniques that previously took hours to perfect in a studio.

In addition to the stutter effects, performers and producers can juggle between a multitude of rhythmic gestures to build tension and create dynamics, both in live performances and studio arrangements. This new version offers an easier setup experience and a greatly expanded suite of effects that give access to near-infinite combinations of sound. With new AUTO mode, users can add sounds to mixes without routing or easily connect a MIDI controller to access multiple gestures at once. The new version also includes an upgraded Distort module and new Comb, Chorus and Limiter modules, a new Reverb module from BT's personal collection, along with a suite of 11 effects. Every parameter in Stutter Edit 2 can be set to move in time with the gesture, letting users create everything from automatic pans to jumping reverb effects and more.

BT is widely recognized for pioneering the "stutter edit" as a musical technique. He originally designed iZotope's Stutter Edit software to help automate his painstaking process for breaking audio into impossibly small fragments and using them for new sound synthesis.

Stutter Edit 2 is unique in that it offers world-class effects and complex rhythmic parameter sequencing in a form that is playable by anyone. We are excited for this updated version to launch as its predecessor has already found its way into the studios of some of the greatest sound designers and artists, and the effect can be heard all over blockbuster films, hit songs, commercials and trailers.

With the first version of Stutter Edit, our collaboration with BT influenced music makers across every genre of music. We are thrilled to continue our partnership with BT and launch the next chapter of this pioneering product.

Price: $199. Owners of the previous version Stutter Edit can find upgrade coupons in their iZotope account. Also available in the KVR Marketplace.