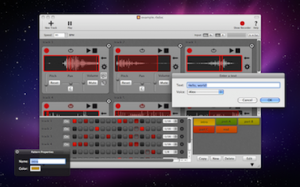 RealBeat is a sampler software that enables the users to record sounds, cut and loop and create rhythms out of them. It also features an easy way to let the computer speak in different voices and use it as a source material for rhythms and loops.

RealBeat for Mac is not intended to be a full-fledged sequencer or sound software. Instead it rather offers simple and fast access to sampling and manipulating recorded sounds live or at home.Categories: Music / Entertainment

RealBeat is $5.99 (or equivalent amount in other currencies).

It's available worldwide exclusively through the Mac App Store in the Lifestyle category.