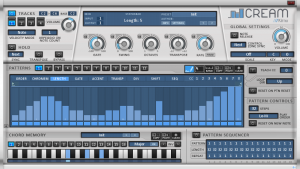 The successor of Kirnu, called Kirnu - Cream - MIDI Performer, is now available for pre-ordering and will be released at the end of February, 2013.

Everyone who pre-orders is able to take part in a closed beta test.

Kirnu Cream is a powerful MIDI performer VST plug-in for Windows and Mac OS X. It works on both 32- and 64-bit systems. Cream is intended to be used in live and offline DAW usage.

With Cream it's very easy to create catching lead parts, bouncing bass lines, swinging drums and lots of other cool stuff. Cream isn't like a traditional MIDI arpeggiator or sequencer. With a simple design it has been made easy to learn and operate. You can create performances easily by tweaking only a couple of controls.

A lot more is planned for upcoming releases, inlcuding:

You can pre-order for 25€ now at www.kirnuarp.com