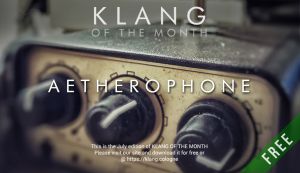 Klang.Cologne has announced the release of its free Klang instrument for July 2020, Aetherophone, saying:

The Aetherophone, or better known as the Theremin, was developed early in the 20th century, but has unfortunately never managed to set significant accents and lasting impressions in the music of the last century. So we thought it would be good to celebrate the Aetherophone once again.

As we want to make our instruments and sounds available for any musician, composer and producer, we decided to establish a new sample pack series. Here we will release several packs which contain selected one shots of our Kontakt instruments like Swayed Keys, Infinite Blur, Vinyl Drums and many more.