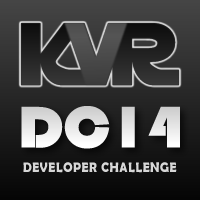 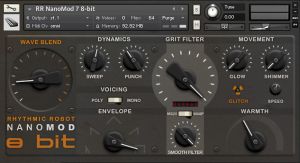 NanoMod 8-bit by Rhythmic Robot is a simple but versatile Kontakt synthesiser based on vintage 8-bit polysynths, featuring an "intelligent" interface that allows the user to adjust multiple parameters with single controls.

NanoMod 8-bit brings the simplicity of Rhythmic Robot's NanoMod interface to bear on the crusty, gritty, aliased sounds of classic 8-bit synthesisers of the early to mid 80s. Using source waves taken from vintage Ensoniq hardware and a front-end incorporating convolved Wasp and MS20 filters, this NanoMod is aimed squarely at big, powerful polysynth sounds – everything from warm and evolving pads to screaming leads.

The wave blend dial to the left of the panel shifts between the two raw waveforms at the heart of the NanoMod, both of which were sampled from vintage 8-bit Ensoniq synths. One is a rough, aggressive sawtooth-based tone, with two detuned saws added to a pulse-width modulated pulse wave for a shifting and thick sound with a lot of harmonics for the filters to bite into. This is intended as a very versatile "classic" synth sound, though with the inevitable artefacts and distortions of the 8-bit resolution clearly evident. The second wave is a shiny, breathy, noise-rich digital wave very typical of early 80s digital synthesisers, which lends sheen and aliasing noise to the mix. Intermediate positions on the dial blend these two waves, yielding a wide range of starting points for all kinds of synth tones.

These starting points can then be sculpted with the set of "intelligent" controls, which adjust multiple parameters behind the scenes. The Grit Filter pushes the raw sound through convolved vintage filters sampled from Wasp and MS20 circuitry, while the Smooth Filter allows for sweeps and more precise adjustments. Glow and Shimmer add movement to the sound, while Warmth adds analogue-style instability. The Glitch button musically randomises all the controls for instant inspiration and patch generation, with its intelligent algorithm biasing it towards musically useful results. Any patch you create can of course be saved.

NanoMods are all about simplicity and fun, and NanoMod 8-bit continues the tradition. It is capable of generating thousands of unique patches with a handful of intelligent controls, and best of all, it's absolutely free.

NanoMod 8-bit requires Kontakt v4.2.3 or later to run. It's compatible with all versions of Kontakt 5. More information is at Rhythmic Robot. 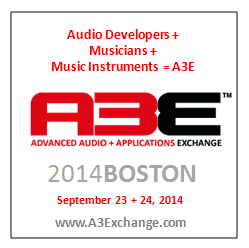 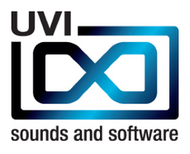 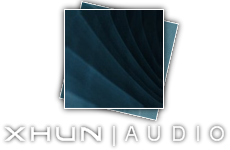