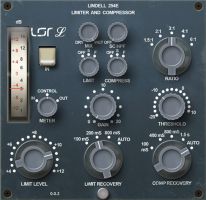 In 1968 the classical 2254 compressor/limiter was built for ABC to make their television broadcast sound better. It later, with the E revision, became an industry standard studio compressor that you've heard on countless hits.

47 years later we are now introducing a faithful plug-in of this beautiful vintage diode bridge compressor/limiter.