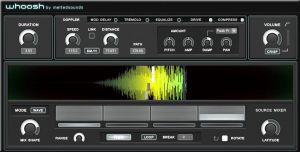 meltedsounds has released whoosh, a sound design instrument for Reaktor that enables you to create whoosh and pass-by effects. It is possible to precisely design sounds varying from whistling wind whooshes to air ripping engine pass-bys or completely over the top granular sci-fi effects.

The included Doppler effects engine was designed from the ground up to physically model the acoustic phenomena of an object that approaches, passes, and recedes from an observer. The individual playback engines, the source mixer and Doppler engine can be manipulated in synchronized connection to each other. This makes it possible to playback the desired sound effect at different durations while keeping everything in sync.

Whoosh is built for Native Instruments Reaktor 5.8 or later (Reaktor Player is not supported).

Note: Loading your own sounds is not supported at the moment, but it is possible. Meltedsounds have a tutorial on how to do this @ thei Vimeo page: vimeo.com/meltedsounds (This will become officially available in a future update / free of charge).