MHC Synthesizers and Effects has announced that it has added a new plugin, Electronic Kits, to its Drum Plugin Bundle. 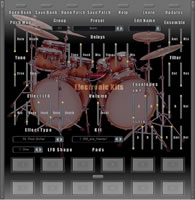 The plugin bundle is available for $199 including the three plugins and the 9 soundpacks. The plugins are currently available as VST plugins for Windows; an Audio Unit for Mac OS X is planned but no date has been set for the Mac release yet.

The plugins feature 12 drum pads, a search application, predefined drum kits which may be edited and a drum sample library.

The plugins have traditional synth sections, including a resonant filter, filter envelope, amp envelope, pitch modulation and an effect section. The effect section features 130 different effect modes, including a variety of filter banks, flanger, resonator, pitch shifter etc. Effects may be layered or crossfaded and they may be modulated by a multi shape LFO.

The 12 drum pads/sounds are velocity sensitive and velocity may control amp (volume) or filter cutoff. Velocity may be switched off entirely as well, for precise programming of drum levels.