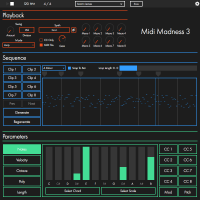 Midi Madness Software has released Midi Madness 3, a major new version of the algorithmic melody generator that creates unlimited unique MIDI sequences based on the parameters set by the user. It can create anything from simple bass-lines, to long and epic chord sequences. Along with notes, the user can create CC data and pitch bend to modulate a synth's parameters.