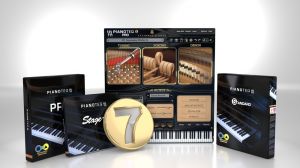 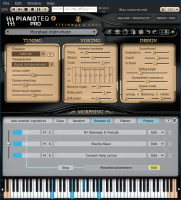 Modartt has released version 7 of Pianoteq. They say:

Instruments XyloHarp, VibraDrum or GlockenTines certainly do not exist. These are however three of the many instruments you can create with the acoustic Morphing introduced in Pianoteq 7 (Standard/Pro). This innovative technology handles the morphing at the physical modelling level, providing acoustic authenticity to instruments that never existed.

Modartt has also added a new Layering feature allowing the user to mix several instruments, e.g. playing Bass Marimba in the low range, Xylophone in the upper range and mixing both together in the middle range. The difference between Morphing and Layering is that in the latter the two sounds are mixed together, whereas in Morphing the instrument Physics itself is being morphed.

Pianoteq 7 has also introduced a new refinement in its physical model: the double polarization. It consists in modelling string vibrations that can take any direction, e.g. parallel or perpendicular to the soundboard. The new physical model allows more complex tones to be produced, and as observed by a pianist, the sound becomes "three-dimensional". It also allows longer sustain, particularly in the bass range, with notes lasting up to a couple of minutes, just like on a real acoustic piano. All pianos in Pianoteq 7 are constructed and revoiced using this new physical model. 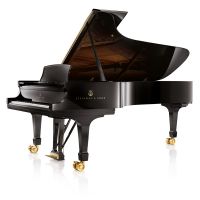 In collaboration with Steinway & Sons, Modartt has recorded a beautiful new Model D Concert Grand at the famous New York Steinway Hall. The reference piano was the very first produced of Steinway's new flagship instrument — the Model D Spirio|r, and has been used by some of the most famous pianists in the world today. The new New York Steinway model D for Pianoteq accompanies the existing Hamburg Steinway D and provides the famous Steinway concert piano sound with superb musical expression.