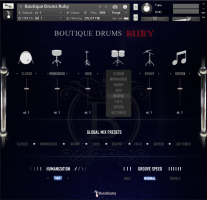 Musical Sampling has released Boutique Drums Ruby for Kontakt; the first of their new series.

Recorded at Hey Hey Studios in Griffin, Georgia and performed by Brian Scoggin (Casting Crowns), Boutique Drums Ruby includes eight interchangeable "baked-in" preset mixes that were developed outside of Kontakt using a variety of processing options, both hardware and software.

Under the hood, Ruby alternates between two different sets of hi-hat/ride multisamples; depending on how quickly you hit successive notes for the given articulation. The initial hit triggers the isolated sample while subsequent hits trigger repetition samples.

Ruby also features live hi-hat grooves that lock to your DAW's tempo. This includes loops for five different hi-hat states and includes an option to crossfade between those states.