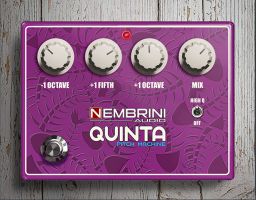 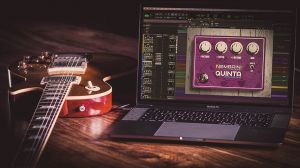 Nembrini Audio has announced the release of the Quinta Pitch Machine pitch shifter, a new Audio Unit, VST plug-in and AAX plug-in for macOS and Windows.

On Apple Store it's available for iOS in AuV3 format.

Obviously octave pedals transpose guitar signals up or down by an octave, providing the perfect effect to thicken up the sound of guitar riffs. Clearly classic octave-doubling sounds awesome, as evidenced by numerous classic recordings, but throwing in a fifth up in addition to the standard octave up/down capabilities of most hardware octavers gives guitarists so much more sonic scope for creating a whole new world. Which is exactly where Quinta Pitch Machine comes into play as an octave pedal-style plug-in with a difference — by bringing an additional +1 FIFTH control to the mix.