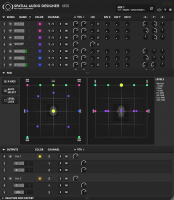 The new version 2.5 works on macOS Catalina and is prepared for Big Sur as well. The user interface was improved for better access to main and secondary functions.

The Realtime Side Export has been enhanced. This pure object-based export function allows right after the export, or later, a discrete and individual offline rendering to different master formats like stereo, 5.1 or 7.1.4. Just one export process is required to create any desired discrete render master. This function can save a lot of time in post-production workflows. This works in stereo only workstations too. Besides that, the new Spatial Audio Designer 2.5 now allows the creation of custom channel formats, which is mandatory for industry applications.

Additionally, the new Spatial Audio Designer is equipped with an OSC interface. It can receive and send OSC data. The Spatial Audio Designer connects the world of industrial applications like live consoles, controller, tracker and spatial audio renderers with the advantage of DAW automation, also connected to the audio objects of the DAW production.

Finally, the output channel amount was extended to 330.