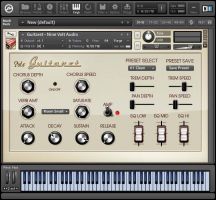 Nine Volt Audio has released Solo Guitaret, a free instrument for users of Kontakt 4 and 5.

Introduced in 1963 and discontinued only two years later, the Guitaret was an invention of Ernst Zacharias, the mind behind other Hohner instruments like the Clavinet, Cembalet and Pianet.

Marketed as an easy-to-play instrument to mimic guitar or banjo, the actual sound sits somewhere between an electric kalimba and electric piano.

The Guitaret is held like a guitar, with the player holding the "neck" or handle to engage the sustain/dampening mechanism. The other hand is used to pluck the 36 metal keys, which barely protrude out of the instrument's body. The vibration of the plucked keys is then captured by a series of internal pick-ups.

In recent years, the Guitaret has been used on a number of new recordings, perhaps most notably on the soundtrack for The Assassination of Jesse James by the Coward Robert Ford by Nick Cave and Warren Ellis.

For Solo Guitaret, the instrument has been sampled at five different velocity layers, with three groups of round robin. A custom interface allows for control over a variety of sound sculpting tools, as well as access to load and save custom presets within a single patch.

This product is not endorsed or affiliated with Hohner Instruments.

More information and free download is available at: ninevoltaudio.com/solo_guitaret