Borrowing design concepts from traditional wood models, steel versions feature “tongues” of varying lengths cut into the top of the drum in a circular pattern. The drum is placed in the percussionist’s lap and is struck with fingertips for a soft sound, finger pads for a slapped sound, and thumbs for a harder tonal “knock”. Overtones of adjacent tongues ring sympathetically with the note that is being struck to create complexity of sound.

As part of Nine Volt Audio’s "Duo" line of products, they’ve recorded two steel tongue drums. The larger 1Tone is a nine-note model that originates from Israel and is tuned to the “Hitzaz” scale (sometimes written as “Hijaz”) in the key of D. It has a resonant and “ringy” quality that creates a beautiful droning background to performances. In addition to finger articulations, this drum has also been recorded with brushes.

The Garrahand is a small yet tunable model from Argentina. Despite it having only seven tongues, each was individually tuned through the sampling process to make the drum playable in a chromatic fashion. This drum has a buoyant and mellow sound with fewer overtones than the 1Tone.

With over 3100 samples and patches that are both natural and modern, Duo puts the evocative and expressive sound of steel tongue drums at your fingertips. 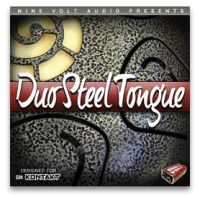 Duo Steel Tongue is available for $59.99. It is compatible with full retail versions of Kontakt 3.5 and up.