NoiseSoft has announced the release of two new VST effect plug-ins for Windows: Qu, a quad filter, and Root Delay. They cost $14 each. 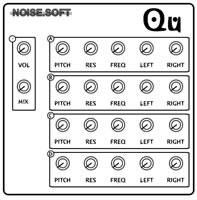 Qu is a quad filter plug-in. It consists of four separate "all band" filters with five separate controls for each channel (A to D). NoiseSoft says that the individual tuning of the custom filters produces audio illusions and phenomena that can not be found anywhere else; phase and frequency based stereo panning controls mean that a user can dial in effects that contrast across the whole audio spectrum, especially when used with track envelopes within the host workstation. 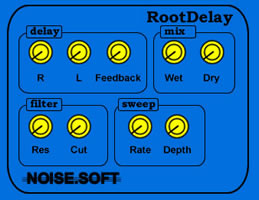 Root Delay is an echo / delay plug-in. It is designed for creating dub-style echo and filter sweeps as well as other delay effects found in all kinds of modern electronic music. The effect features a delay section with separate adjustable controls for left and right time settings and also a filter section with controls for sweep rate and depth. The delay and filter combination produces everything from granular glitch- / IDM-style processing to sweeping dub-style echoes and slap back effects.