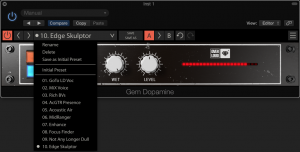 Overloud has released Dopamine, an emulation of two classic tape encoding processors, used as enhancers, designed to revive individual tracks as well as complex mixes while preserving their natural tone. It is the fifth product in Overloud's Gem plugin line dedicated to mixing and mastering.

Overloud say Dopamine does not introduce unpleasant artefacts like the exciters do: it dynamically balances the harmonics that naturally exist in the original audio rather than generating non-existent harmonics by synthesizing them.