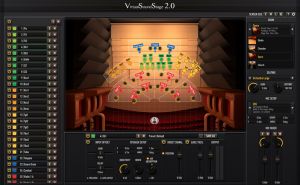 VirtualSoundStage (VSS) is a unique audio plug-in, which gives you the ability to position your instruments on a virtual stage with just a few simple clicks.

Every point of a room sounds different. A fact traditional reverbs don't take into account. By recreating a realistic acoustic environment VirtualSoundStage will bring a sense of space to your mixes.