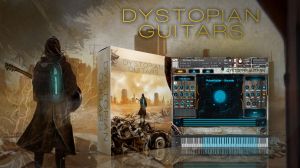 Dystopian Guitars aims to be an all-inclusive solution for modern guitar needs and features six different categories of Kontakt instruments: natural and "unnatural" solo instruments, customizable ensembles capable of performing multisample instruments together with loops, pulses and sequences, a playable pulse designer with several guitar and bass pulses, a collection of acoustic and processed shimmer instruments, a variety of pads and ambiences, guitar tools and FX and a quad layer note sequencer and arpeggiator.

This sampler package is so awesome, it's unfortunate that it's not a direct plug-in/soft-synth, but that you require Kontakt by Native Instruments (which will double your investment if you don't already have Kontakt). That's not necessarily a bad thing, since Kontakt is the number one sampler platform and you would get a lot of future use from its investment (as well as some great and useful libraries that come with Kontakt, all of which you can resell at a later date). Now onto the good news, that Dystopian Guitars is a solid production (three years in the making) in sound quality and the sounds included, which involves some traditional, natural instruments (e.g., nylon string guitar), but also a plethora of very modern (Metal guitar chugging) and unnatural instruments (e.g., metallic pads and shimmers). The first demo below includes some sample sounds from the hundreds possible.

Since I'm addressing what this package does include, let's take a closer look at this 21.32 GB sampler. You get 110 ensembles, which form the backbone of any composition, with various thick, lush and pulsating rhythms. These are very eerie and spacey, to say the least. Also included are 101 pads, 29 shimmers, over 100 natural and unnatural instruments, 334 loops, nearly 70 bonus sequences and 20 tools/FX instruments. Once you consider that you can edit and save any of the sounds (from simple to complex) and build your own sounds, there is a lot of power under Dystopian Guitars' hood. The second demo below involves a created composition/backing track for an analog lead guitar (a Schecter Hellraiser Hybrid with Sustaniac). Both this and the previous demos were created with a piano/keyboard controller, although you could use any MIDI instrument.

Being more of a guitar player, I'm enthralled at the ease-of-use and uniqueness of Dystopian Guitars. This has opened a few doors in regard to music composition. Typically, I use Band-in-a-Box (BIAB by PGMusic) to create backing tracks, and I still do for the most part. In using various soft-synths, including Dystopian Guitars, it's easy to develop more grandiose soundscapes not possible in BIAB. Moreover, a BIAB composition may include an elementary 'pad' or synth that I now can replace with something far more dramatic and imposing, via a soft-synth, such as Dystopian Guitars. And this is true of other possible track replacements since Dystopian Guitars has so many rhythmic pulses and sequences that can substitute less impressive tracks or be added to a drum track for a really impressive 'wall of sound.'

A strong bonus with this package is that there are a large number of prepared sounds that involve pulses, shimmers, beats and rhythms, so that those lacking computer skills still can put together some very impressive compositions. In that regard, simply watch the second demo and you will see me playing stuff one finger at a time, although some samples sound like multiple notes and instruments being played. The same is true with the first demo, although now and again I may have played some 3-note chords.

Currently this software package is priced at $169 USD, although that's an introductory price soon to increase to $199. Again, although you need Kontakt to run this software, there is a lot of power and modern flavor, so that the software should retain its relevancy for years to come, thereby making it a worthy investment, besides a pleasure to use.