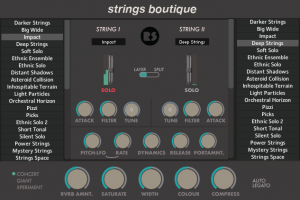 You will have access to presets shaped to create different emotions on the go, so you can support your harmony with a string sound that perfectly fits with ease and speed. We designed orchestral, ensemble, solo and ethnic presets as well as going beyond classic string sound, blending subtle analog instruments to create even stronger sound images.

To further capability and performance, the engine lets you decide between layering or splitting which emulates an orchestral variety. The split mode (keyboard split) combines the first preset's lower octave with the second layer's higher octaves.