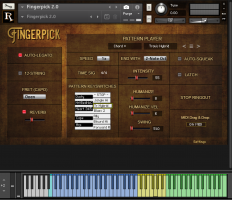 Realitone has released version 2 of Fingerpick, their acoustic guitar instrument with Pattern Player.

The update adds a new nylon string guitar to the original steel string guitar, doubles the number of patterns (including 3/4 and 6/8 patterns), adds knock and squeak samples (including an auto-squeak option), and includes a new Latch feature, so the user no longer needs to hold chords to keep the Pattern Player playing.

A video walkthrough of all the new features can be seen here: YouTube.com/watch?v=pnoTYqgbjUg