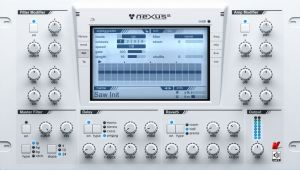 Version 2.3.0 brought the much-anticipated 64-bit version of Nexus2. Other improvements include enhanced performance and a new photo-realistic look for the GUI.

Initially, only the new default white3 skin is available, but ALL existing skins will be replaced with new, compatible ones over the next few weeks, free of charge to all customers of the respective skins, with a focus on the black and blue ones, since those ship with Nexus2 and thus are the most widespread.