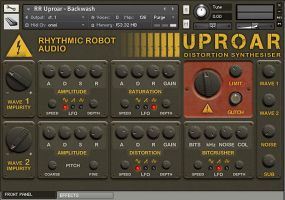 Rhythmic Robot Audio has released Uproar, a Kontakt instrument that inverts the process of traditional analogue synthesis in favour of distortion-based sound creation.

Instead of filtering harmonically rich waves, Uproar is designed to distort and energize smoother waveforms, creating sounds that are progressively harmonically richer the more distortion is added. It utilizes three separate distortion circuits: Drive, Saturation and Bitcrush, each of which is extensively controllable using ADR envelopes and LFOs, so that parameters such as drive amount or bit depth can be swept and modified. This allows Uproar to create dynamic, moving, evolving sounds which retain the characteristic signature of the distortion used.

Twin base oscillators can be blended smoothly between pure sine waves and more complex, erratic waves which were sampled by eBowing electric guitar strings. These add considerable variation and movement to the sound even before the distortion circuits are brought into play. Further controls include comprehensive effects, and a Glitch button which randomises all the parameters in a musically-intelligent way, allowing for easy one-click random patch generation.

Uproar is intended to bring a fresh angle to traditional synth patches, and is particularly suited to leads, basses and pads.

Uproar requires Kontakt 4.2.3 and above; it supports all versions of Kontakt 5 but will only work with Kontakt Player for a limited 15-minute demo period.

Find Uproar in the KVR Marketplace