NanoMod 5: Analog Bass, £3.00, is (as the name suggests) an analogue bass synth. Like the other NanoMods in the series it uses a simple, intuitive interface to control a wide feature set, allowing the user to program powerful sounds quickly and easily. Key to the interface is the Glitch control, which randomises the settings in a "musically intelligent" manner, and making a great way to create new patches or get a sound starting point for tweaking.

NanoMod 5: Analog Bass takes two core synth waves as the DNA for its sounds. One is taken from a Roland SH7 analogue, and is based around a powerful square wave sound with a lot of midrange harmonic content. The second is derived from a modular synth bass tone with a distorted triangle wave underpinned by a sine sub-oscillator an octave below. Dialling between these waves can produce everything from harmonic-rich tones for the filters to bite into, through to strongly subby basses ideal for holding down the low-frequency of a mix, and everything in between. The NanoMod interface with its interacting controls makes rolling new sounds both fun and simple. 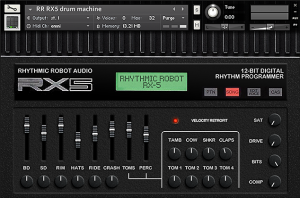 RX5, £5.95 (intro price: £5.45), is a meticulous recreation of Yamaha's mid-80s flagship drum machine, the RX5. The original RX5 headed Yamaha's lineup of drum machines and was very advanced for its time, boasting 12-bit sampled sounds, multiple outputs with trim, comprehensive editing including sample-reverse, and 24 onboard sounds. It was, however, costly, and not all that easy to program compared to Roland's competing units, which has led to it being something of a cult classic now. It featured heavily on Prince's Sign o the Times, Madonna's La Isla Bonita, Cameo's Word Up (where if forms the backbone of the whole song) and many hits by The Pet Shop Boys.

The Rhythmic Robot RX5 captures all the kit pieces of the original, plus the same 24 sounds reversed on the hardware itself. Individual control over level and pan and a comprehensive selection of drum-centric effects round out the package.

Both libraries require Kontakt version 4.2.3 or above (including all versions of Kontakt 5) to run. Kontakt Player isn't supported.

Find RX5 in the KVR Marketplace