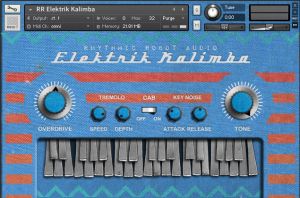 Rhythmic Robot have released Elektrik Kalimba, a hybrid instrument for Kontakt bringing together the character of a three-octave African thumb piano (or Kalimba, Mbira, Marimba, Karimba) and the body and weight of a classic electric piano.

Elektrik Kalimba is designed to be expressive and playable and is capable of holding down a traditional EP role in a track – though with a unique identity of its own – or of moving into more overt world-music territory; it can even sound a little like a steel drum with the right settings. Thumb noise attack and release samples can be adjusted individually in level, and are randomly picked from multiple round-robin samples to ensure an organically varying response. Meanwhile, tremolo and overdrive controls mimic the kinds of effects typically associated with classic American electric pianos.

Elektrik Kalimba is intended to fulfil the role of a traditional electric piano such as a Rhodes or Wurlitzer, but with a unique African-themed identity of its own. It is also, through adjustment of its UI controls, capable of percussive effects, more overt world-music style sounds, and sound design opportunities.

Elektrik Kalimba is available now from Rhythmic Robot, at an introductory price of £9.95 (normal price £14.95). It requires Kontakt version 4.2.3 or later to run (including Kontakt 5). Not compatible with Kontakt Player.