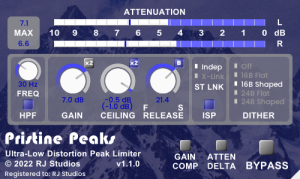 Pristine Peaks uses a unique approach to peak limiting that does not employ saturation or clipping in its gain reduction process. The result is extremely low THD and no aliasing for applications where "clean" limiting is most desirable.

Pristine Peaks is a 64-bit plugin in VST, VST3 and AAX formats for Windows PC and VST, VST3, AAX and AU formats for Mac OS 10.11+ on Intel and Apple Silicon.