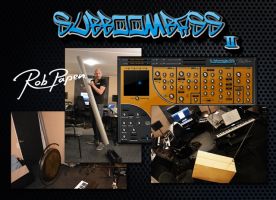 Rob Papen has announced SubBoomBass 2, a major new version of the bass synth plug-in. In this new version its GUI (graphical interface) receives a graphical makeover and size upgrade (2 different sizes planned) and the sound colour has been expanded with:

Other new features include:

SubBoomBass II is scheduled to be released at the end of 2017.

SubBoomBass 2 once released will also be part of the eXplorer4 bundle.

Find SubBoomBass 2 in the KVR Marketplace