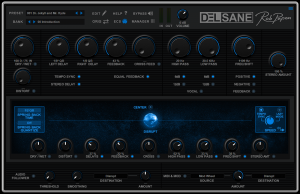 Rob Papen has announced the release of DelSane, a delay effect plug-in for macOS and Windows in VST, AU and AAX plug-in formats.

It is true that the amount of Delay FX available is like the number of stars in the Milky Way. Looking at all these stars (Delays) can be overwhelming, so to keep your music production sane...we created DelSane, which is a lovely sounding Stereo Tape Delay FX plug-in with Dr. Jekyll and Mr. Hyde behavior.

So, for a sane-sounding, easy-to-use Stereo Tape Delay, you are spot on with DelSane. Now, it would be insane if this - Rob Papen - product, wouldn't have something special...something that you always expect from this brand. And YES... therefore, it is called DelSane, since you could imagine deleting the 'Del' and replace it with 'In'. Because Insane types of Delays are possible with DelSane.

Find DelSane in the KVR Marketplace

FEATURED
50% Off
AX73Synth (Analogue / Subtractive)
by Martinic  $59.50
Add A Review My KVR
Was $119.00; Save $59.50 until 31 Oct 2021
$59.50Buy
BUYING!XCheckout
The Orchestra Essentials
Orchestra
by Best ServiceMercury-4 Polyphonic Synthesizer
Software Synthesizer
by Cherry AudioReason 12
Virtual Studio
by Reason Studios
Featured
An Introduction to Paragon ST