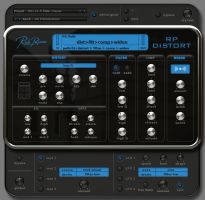 Rob Papen has released RP-Distort, a free (until end of 2011) plug-in for Rob Papen customers.

RP-Distort is a distortion unit that can be combined with an analog modeled filter, compressor and widener unit. It offers 22 distortion types included ring modulator and lo-fi as well as EQ and noise-gate.

The effects units can be re-ordered and turned on or off. So if the user only wants an analog modelled filter. RP-Distort can do it. Or only the unique widener unit which is great for widening a mono track.

On top of that, the controls can be modulated using MIDI sources or by one of the 4 built in LFOs that can sync to the host tempo.

RP-Distort is free for any current users of RP plug-ins and also for any new customers, till the end of 2011.