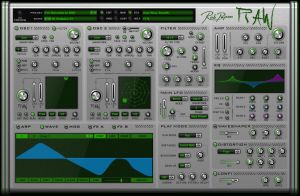 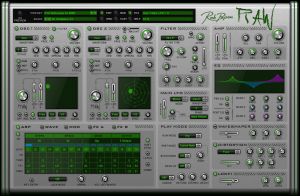 Rob Papen Soundware has announced the availability of RAW.

RAW was designed with input from producers Sebastian Hoff and Freek Vergoossen (a.k.a. DJ Promo and DJ Free-K, respectively) who proposed a synthesizer that focused more on 'distorted' sounds with an easy-to-use layout.

RAW has a different signal setup, synthesizer-wise. It has two oscillators and a filter, but what is new when compared to other RP synthesizers is that there is an EQ that can be pre- or post-distortion. After that, there is a Waveshaper and dedicated Distortion module with several types of distortion, as well as a Low-Fi control. This is new to this synthesizer, and it's part of the concept that the distortions are on the voice level, so it's not just a case of a total signal going into the distortions, but rather each voice has its own Waveshaper, Distortion, and Lo-fi.

In addition to the flexible X/Y fields found in the OSC 1 and OSC 2 sections (which will already be familiar to refined Rob Papen Predator and BLUE-II soft synth users), RAW users can effectively draw their own 'waveforms' to be used as LFO waveforms, enabling the creation of unique 'wobble' sound movements — perfect for dubstep and other EDM styles. Other effects such as Chorus, Flanger, Phaser, and Stereo Delay Rob Papen's signature high-quality Reverb — all add to the superlative sound sculpting possibilities on offer, as does the super-cool step sequencer/arpeggiator, and many more fanciful features above and beyond. But mindful of that original easy-to-use layout request, a self-explanatory.

The presets include many by DJs and producers like Deathmachine, DJ Hidden, DJ Promo, DJ Thera, D-Passion, Ophidian, Mad Dog, Rob Fabrie, N-Vitral, The Playah, The Viper, Warface, and many more.

Find Blue III and RAW in the KVR Marketplace