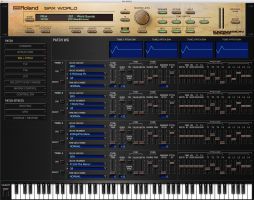 At NAMM, Roland Cloud (Exhibit 10702, Hall A) has announced the addition of SRX World and Drum Studio-Acoustic One to its expanding collection of cloud-based software synthesizers, drum machines, and sampled instruments.

Created in the spirit of Roland's seminal hardware board with modern adaptability, SRX World is packed with sounds from around the world. From didgeridoo to tabla, berimbau to sitar, SRX World has the power to bring creative projects into focus with cinematic scope. Wherever music is being made, from Hong Kong to Finland, or anywhere else on the map, SRX World puts global sounds at the fingertips of users worldwide.