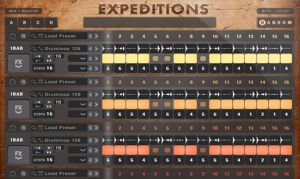 Sample Logic has announced the release of Expeditions, a dynamic rhythmic sequencing and effects engine accompanied by a collection of eclectic cinematic and world loops for all styles of music production.

Sample Logic say that by harnessing the power and flexibility of a 4-core loop engine, Expeditions possesses limitless creativity "that is sure to transport your music around the world and beyond". The diverse loops span the entire globe from Africa, Asia, Europe, America and Latin America.

Expeditions is available now at an introductory price of $199 until November 21st, then $299. You can crossgrade for $149 if you already own Electro City or Rhythmology.