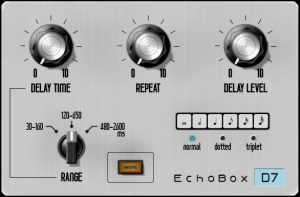 Sender Spike has announced the release of Echobox D7 for Windows 32-bit and 64-bit platforms in VST2 format.

Echobox D7 is a loose model of the echo mode of an inexpensive (and now discontinued) guitar stomp-box which itself was a digital remake of an acclaimed tape echo, and whose trademark sound is best described as Lo-Fi.