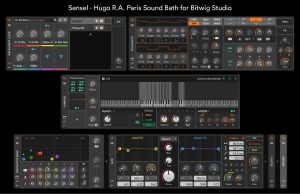 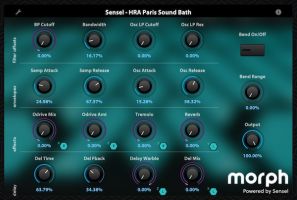 Sensel has released the Sound Bath instrument in collaboration with artist Hugo R.A. Paris. It includes versions for UVI Falcon and Bitwig Studio Sampler and Polysynth.

Using source material from an ambient sound bath piece from Paris, Sensel has created a playable, interactive instrument for the Morph. Blending textures, primarily from the 4MS SWN synthesizer, many long sample loops are distributed over 2 octaves.

This instrument premiered on the Sensel "Artist Talks" live stream series, and can be downloaded from their landing page.

Designed for the Buchla Thunder Overlay (though usable with any system), each key plays a different sample. Vertical gestures on the keys control a bandpass filter to shape each sound''s timbre. Pressure controls panning.

In the Bitwig Studio version, the top pads on the Thunder play a Polysynth sound, with filter and sync controls on vertical and pressure. As always, the Hex pads control the first six macros on the selected device. On the Sound Bath Instrument Layer, this corresponds to Delay, Reverb, and Reverb Highs with the Left Hex, and Resonator, Distortion, and Resonator Highs on the Right Hex.

In the UVI Falcon version, vertical gestures on each note control filter cutoff for a bandpass digital filter, after-pressure controls the stereo spread of the digital filter, and velocity selects the start point of the loop. The smaller top keys and the L & K keys of the Thunder play analog modeling oscillators, also modified by digital bandpass filtering.

The Hex pads are XYZ effects controllers, as indicated by the L and R hex icons in the interface. By default, these pads are mapped to MIDI CCs 20-22 (Lt XYZ) and 23-25 (Rt XYZ). These also work with MIDI CCs 9-11 and 12-14, the default settings for the knobs on the Music Production overlay.

Learn more about Hugo R.A. Paris on his website and Patreon page.