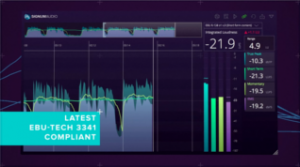 Signum Audio has announced the release of its first product: Bute Loudness Analyser. The company, hailing from Edinburgh, Scotland, hope that audio professionals will take to their user-centric approach.

Signum Audio believes that current tools are more cumbersome and complicated than they need to be, and it is their mission to simplify and improve the latest technology to make it more user-friendly, allowing for unhindered creativity, resulting in better sounding media.

"We are introducing pro-audio tools that are straight-forward to use, help professionals get the job done quickly and are intuitive for anyone producing audio. We anticipate that in the coming years there will be a huge rise in demand for richer content, which means more and more people will want to create richer content. By reducing the learning curve associated with tools, we hope that there will be better audio everywhere."

Signum Audio's fresh user-centric take on Audio Software stems from the wealth of experience gathered from collaborating with audio professionals in the gaming and audio industry, streamlining their workflows and automating their tasks. Rigorous refinement, optimisation and attention to detail is paramount to Signum Audio's approach.

Bute, named after the Scottish isle that is divided into highlands and lowlands, delivers a comprehensive array of features packaged into a sleek and intuitive user interface. Some of the most notable features include a custom warning system, flexible scaling window, DAW synchronisation for automatic re-metering, and a multitude of meter ballistics.

It also offers a wide list of traditional and online presets in one place including all revisions of ITU-R BS.1770 and fully supporting EBU R-128, ATSC A/85, OP-59, ARIB TR-B32, AGCOM 219/09/CSP (including deprecated versions) EBU-R128, ATSC A/85, Spotify, YouTube, Netflix, Hulu, and Apple Soundcheck - and they plan to continually update them.

Bute comes in 2 version: Stereo (£200+vat) and Surround (£250+vat). Until the 14th of April KVR Audio members can get a 20% discount by using the code KVRAudio20. You can get an additional 10% off by subscribing to their newsletter.

Over the coming months, the developers plan to release a series of updates to transform Bute into a fully-fledged loudness suite.