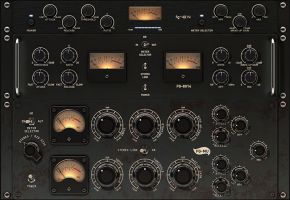 Every nuance of real analog compressors has been modeled including the exact non-linear characteristics of their transformers, tubes, VCAs, amplifiers, phase distortions, harmonic distortions, and timing.

The first compressor is called the FG4014. It is modern, clean, pristine, and can compress program material in a musical but transparent manner. It is perfect for all types of mixes and masters, and even sounds great on drum overheads and acoustic guitar.

The second compressor is called the FG8014. This analog beast of a compressor is a hybrid model of a famous British console compressor combined with characteristics of another famous compressor known for its red faceplate. It's punchy, fat, tight, and rich sounding, with a drive control that can enhance the transformer saturation to give it even more attitude. It's a buss compressor for all types of music including rock, pop, country, hip hop, house, and more. It also sounds good on drum busses and even individual drums like kick snare and toms. This compressor was designed to be the ultimate "dream buss compressor".

The third compressor is called FG MU. It is modeled after the classic Fairchild 670, but then Slate Digital added characteristics of two modern Vari MU compressors as well. It has a warm, fat, deep, musical character that is perfect for all types of music. For mastering, it can add the final bit of glue, air, depth, and transient sparkle.

Finally, VBC will come with stock presets made by some of the industry's top mixers.

VBC is in its final stages and will be released in November through the Slate Digital online store and all Slate Digital retailers worldwide. It will have an intro price of $199.