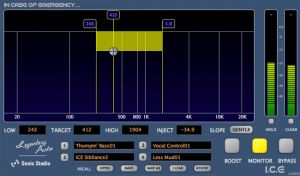 Sonic Studio has announced the release of Legendary Audio I.C.E. (In Case of Emergency), a new plug-in, initially for Mac OS X with a Windows version to follow, that they say:

The I.C.E plug-in incorporates innovative techniques of Veteran Audio engineer Billy Stull of Legendary Audio (creator of the Masterpiece Analog Mastering System in collaboration with the renowned designer Rupert Neve). The plug-in has been designed by the programming team at Sonic Studio -famous for soundBlade and other hi-end digital products.

I.C.E is a different way of processing audio in the Digital Age. Although primarily designed and used to solve audio problems, it can be used to "sculpt" audio as well.

Distortion, especially of the digital type, is a huge problem in audio today. It is very easy to get a "warm" microphone, a "warm" preamp, plug-in, mixing console, and other software. "Warm" translates to generally "good" distortion (like cholesterol, there is good and bad distortion), but by the time the audio gets to the mixing or mastering stage, it is too warm (too much distortion) and it needs some I.C.E. (I.C.E is cool). I.C.E can counter the distortion and clean it up by reducing or eliminating the distortion after it has already been recorded and processed. This is just one of the important uses of I.C.E. It can be used to attack the aforementioned list of common audio problems.