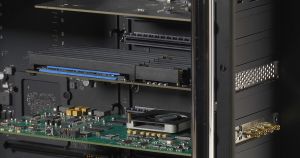 Here's what they are saying:

What It Does:
The Sonnet M.2 2x4 Low-Profile PCIe Card enables users to mount two M.2 NVMe 2280 PCIe SSDs (sold separately) into almost any expansion card space with an available x8 or x16 PCIe card slot; using today's highest-capacity SSDs, up to 16TB of storage capacity may be installed. RAID 0, RAID 1, and JBOD configurations are supported, providing users with flexibility in configuring the SSDs for best performance or data safety, or both.

Why It's Important:
For users who need to add internal storage to their computer and require ultra-high-speed data transfer speeds for a smooth workflow — such as video editors working with 6K and greater resolution footage — an NVMe M.2 SSD-based upgrade is ideal. Many computers do not include slots to support installing M.2 SSDs directly but do include PCIe expansion card slots. With Sonnet's M.2 2x4 Low-Profile PCIe Card installed, a user can mount two SSDs in a single PCIe slot — with no cables, adapters, or mounting trays required — for instant-access media storage or as a high-performance scratch disk. For users whose computers lack PCIe card slots — such as notebooks, mini, and all-in-one desktops — but include Thunderbolt ports, installing the Sonnet card into one of Sonnet's multi-slot Echo Thunderbolt to PCIe card expansion systems connects the M.2 2x4 card's dual SSD slots through a single cable.

How It's Distinctive:
Compatible with macOS, Windows, and Linux operating systems, The Sonnet M.2 2x4 Low-Profile PCIe Card requires only a low-profile card space and includes both full-height and low-profile PCIe brackets — so it is ideal for use in most any desktop tower, mini workstation or server computer, or Thunderbolt to PCIe card expansion system with an available x8 or x16 PCIe slot. Because the Sonnet card employs a high-performance 16-lane PCIe 3.0 bridge chip, it doesn't require specific SSDs or a particular motherboard to operate, nor PCIe bifurcation to support RAID features. Installed in a computer's PCIe 3.0 or 4.0 card slot, the Sonnet card supports outstanding storage performance — a single SSD installed on the card can deliver data transfers up to 3,400 MB/s — with two SSDs installed and configured as a RAID 0 set, sustained transfers up to 6,600 MB/s are supported. To support their sustained high performance, the card's integrated heatsink silently cools SSDs to eliminate the need for them to "thermal throttle" — an SSD protection feature that prevents overheating by choking performance until they cool down.

When You Can Get It:
The Sonnet M.2 2x4 Low-Profile PCIe Card (part number FUS-SSD-2x4-E3S) will be available the last week of June from Sonnet and soon after from channel partners worldwide at the suggested retail price of $199.99.