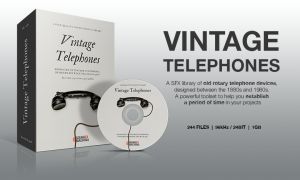 Sound Ex Machina has announced the release of Vintage Telephones, an SFX library that contains 244 sounds extracted from 10 historic, rotary dial devices designed between the 1880s and 1980s.

Inside, you'll find three common ringing patterns (used in the USA, Australia, and Europe) for each telephone type, handset pickups/set downs, number dials 1-0, hook toggles, as well as single ringings with natural long ring decays to design your own ring timings according to your project needs.

In addition to the standard telephone sounds, Sound Ex Machina captured some experimental ones, which were generated by feeding the devices with random low frequencies, thus producing some really weird mechanical rattles, buzzes, glitches, and unusual bell ringings.

Below, are just a few of these sounds included, in the hope that they could serve you as inspiration or even a foundation for new, designed sounds.

All sounds were recorded in mono, using an AKG C314 as an overhead mic, in close perspective, plus two contact microphones attached to different spots on the body of each device, to capture all the vibrations caused by the mechanical bell and dial systems.

The Following 10 Telephones Were Recorded: