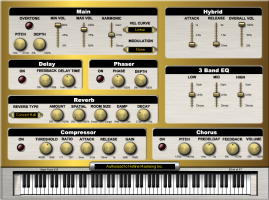 Sound Magic has announced the release of version 2.0 of GrandEpiano for Windows, which includes the following changes since Version 1.0:

GrandEpiano presents the sounds from a classic Rhodes Electric Piano. By using Sound Magic Hybrid Modeling Technology, GrandEpiano not only provides an accurate copy of the vintage electric piano sounds that appear in many great hits, but also provides the playability that physical modeling brings. And, users are not limited to just the Rhodes - 10 precise controls allow musicians to easily enjoy the sounds of a Wurlitzer or perhaps a Horner.

An important feature of GrandEpiano is that users can freely "hybrid" this epiano sound with any of the piano modules in Supreme Piano 2 to create a new hybrid sound. GrandEpiano provides a special Hybrid Mode with 3 controls to help its users better mix the native electric sounds with those of other Sound Magic Pianos.

GrandEpiano costs €69.00. A Mac OS X version will be released in near future.

Sound Magic has also released KVRer Piano Preset for its free Piano One Windows VSTi. Responding to some KVR members' requests, Sound Magic has built 6 presets for users to use in different style of music. You can download these presets in Piano One's Download, Banks, Patches, etc. section here at KVR.

FEATURED
50% Off
AX73Synth (Analogue / Subtractive)
by Martinic  $59.50
Add A Review My KVR
Was $119.00; Save $59.50 until 31 Oct 2021
$59.50Buy
BUYING!XCheckout
Mercury-4 Polyphonic Synthesizer
Software Synthesizer
by Cherry AudioSaurus 3
Synth
by Tone2 Audiosoftware
Featured
An Introduction to Paragon ST