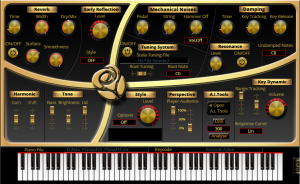 Sound Magic has released version 3.0 of Imperial Grand, featuring its Neo Piano Hybrid Modelling Engine, which is the successor to Imperial Grand 2.

Here's what they say: "The unique feature of Imperial Grand is that you can forge your own sound with it. Through Sound Magic's online customize sound system, you can easily forge your personal sound. You not only get a standard Bösendorfer sound, but you also get a sound fit for your taste. And more importantly, other Imperial Grand users do not have this sound because it is customized for you only. This makes Imperial Grand unique to you and cannot duplicate. It will become your "secret " weapon in your music production."

Neo Piano features a custom built Hybrid DFD/RAM system. It is a flexible system which can be optimized for different playing applications. If you are using an old system with low RAM, DFD will work well. If you are using a top performance 64-bit system with plenty of RAM, you can choose to play Neo Piano totally from RAM. A balance of DFD and RAM samples can be utilized to optimize general performance. In all cases sound quality remains at the highest level. For live stage performances, the entire piano sample set can be loaded into RAM, removing any worries about OS interference with Hard Disc access. For studio and composition use, DFD is ideal with modern computers.

A major breakthrough in Neo Piano Engine is the resonance engine. Every Grand Piano has a very large soundboard which reflects sound which resonates together with the piano's wood body. This is a continuous process and makes every note sound unique. In order to simulate this behavior, Sound Magic first captures multi angle IRs from the soundboard, then applies new technology to convert those IRs into Resonance Engine Algorithms. The result is a concert hall sound reproduction full of life.