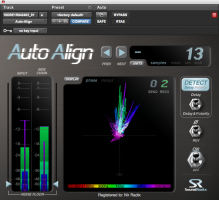 Sound Radix has announced the immediate availability of Auto-Align version 1.4 for Windows, in RTAS and VST plug-in formats. In addition to the Audio Units and RTAS versions, this release also brings Auto-Align VST compatibility for Mac OS X, as well as graphics bug fixes.

Auto-Align is an automatic phase & time alignment plug-in. When recording an instrument with more than one mic, sound tends to reach each microphone at a slightly different time and thus cause some frequencies to cancel each other while other frequencies can build up unnaturally. This phenomena is known as the comb filter effect. Until now, compensating for the delay between the microphones had to be done manually - an extremely time consuming and inaccurate process.

Auto-Align will "listen" to your multi-mic recording and automatically measure and compensate for the delay between the microphones, or between a DI box and a microphone - sample accurately, significantly reducing the comb filter effect and dramatically improving the resulting sound.

When distant microphones are used and a delay is desired to enhance the sense of space, Auto-Align can time-place the microphones to better match the close-mic'ed source and therefore minimize the comb filter effect. Auto-Align can also automatically detect a reversed polarity mic and compensate for it.

For more information and to download the free trial version, go to www.soundradix.com

Find Auto-Align in the KVR Marketplace