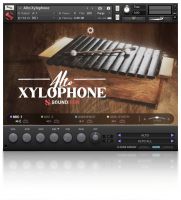 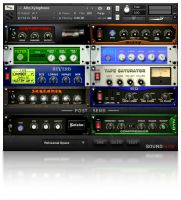 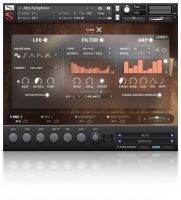 Soundiron has announced their newest release, Alto Xylophone, a playful collection of deeply sampled Orff-tuned percussion instruments for the full retail version of Kontakt 5.5 or later.

This instrument primarily found in elementary music classrooms, measuring at just over two feet long. It has a warm plunky tone and fast decay, with 13 rosewood bars laid in a diatonic C major scale from C4 - A5. We used felt mallets to capture each note, then recorded glisses and percussive knocks. We also sampled two soprano xylophones an octave higher: One has 13 notes (C5-A6) with a rounded playful timbre, while the other has 12 notes (C5-G6) with a crisp biting tone, performed with mallets and wooden cube hammers.

All three xylophones were recorded in a dry studio using two microphone positions, with 10 round robin and up to 14 velocity layers per note. After that, they expanded these natural wooden tones with 20 ambient organic soundscapes and 20 custom FX presets to kickstart your creative exploration. Alto Xylophone fits comfortably in any genre from horror to jazz, and it's ready to bring acoustic percussive accents to your next composition.